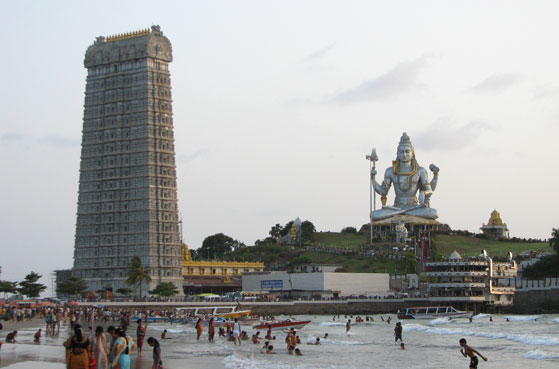 The twenty storied Gopuram at the entry of the temple complex is around 237.5 feet tall and is called as Raja Gopuram. The temple has been built on a small hillock called as Kanduka. A list has been built for the convenience of the devotees which carries them to the hill top and to the top of the Gopuram. The most exciting thing about the temple is the scenic view of the Lord Shiva statue along with the breathtaking view of the seashore. At the foot of the temple is located a temple devoted to Shri Rameshwara. Next to the idol of Lord Shiva is the also present a shrine devoted to Shaneeshwara while below the Lord Shiva’s idol is a small cave. At the entry gate of the temple are the statues of two elephants which are believed to act as the guard to the temple. Within the temple premises is present a depiction of Lord Shiva giving the teaching of Geeta to Arjuna and beside that the depiction of Ravana giving the Atma Linga to Lord Ganesha. Except the principle sanctum, which still holds the same old flavour, the whole temple has been transformed in the contemporary style. The contemporary temple had been built by R.N Shetty, a philanthropist and businessman.

SIGNIFICANCE OF THE TEMPLE

HISTORY AND THE LEGEND ASSOCIATED

The temple itself has been named as per its significance, Murudeshwara refers to Shiva. The interesting story of the temple has been linked to the ear of Ramayana. As a result of the penance dedicated to the Atma Linga, Lord Shiva gave the power of invincibility and immortality to Hindu Gods. Consequently Ravana, the king of Lanka also tried wooing Lord Shiva by worshipping him so as to attain invincibility and immortality. When Lord Shiva appears before Ravana after looking at his devotion, and he asks Ravana to tell him, whatever he wants. Ravana then asks for Goddess parvathi and Lord thus gives Parvathi to Ravana.

On the way to Lanka, Narada muni deceits him into believing that the one who was with him was not Parvathi and the real Parvathi is in Pathala. Consequently Ravana went to Pathala and married a king’s daughter who believed was real Parvathi. After knowing that he has been fooled by Naryana, he again sits to meditate As a result of which Lord Shiva Appears. This time he asked Lord Shiva to bless him with the sacred Atma Linga and Shiva accepting his demand, gave him the Lingam but puts a condition before Ravana that if ever this Lingam will be kept on the ground all its powers will come back to Lord Shiva.

This made narada to realise that with Atma Linga in his hands, Ravana will create havoc on the earth by obtaining immortality and so he thought of approaching Lord Ganesha for help. While Ravana was on the way to Lanka, Lord Vishnu planned to remove the effect of the Sun’s light so as to make it appear as dusk which will compel Ravana to perform his evening rituals and he will have to put the Linga on the ground. While he was thinking of the curse of Atma Ling, a Brahmin boy approached him who was actually Lord Ganesha. Lord Ganesha had taken up the form so that he would put the Atma Linga on the ground while he goes for the evening rituals. Lord Ganesha’s plan worked and when Ravana returned he found the Linga on the ground. This made him furious and he understood about the plan and out of anger he tried destroying the Lingam. In the process he threw the case which was covering the Lingam to Sajjeshwara at a distance of 23 miles while the lid of the case he threw to Guneshwara and Dhareshwara situated at a distance of about 10-12 km. And the piece of cloth covering the Atma Lingam he threw to Mrideshwara which was later named as Murudeshwara.

Also, at Murudeshwara, saint Bhagirath awaits for Ganga to come on the earth from the hair lock of Lord Shiva.

Nearest Road – 165km from Mangalore and 455km from Bangalore

Nearest Railway Station – Murudeshwara station is only 2 km away from the temple.

FESTIVALS CELEBRATED AT THE TEMPLE

Maha Shivaratri (February or March) and Karthik (November to December) Purnima is celebrated in the temple with full fervour and enthusiasm.

Published by The Orion

1. Poet on a motorcycle 2. Consultant Cyber Law & Crime.3. Professional Rider View all posts by The Orion